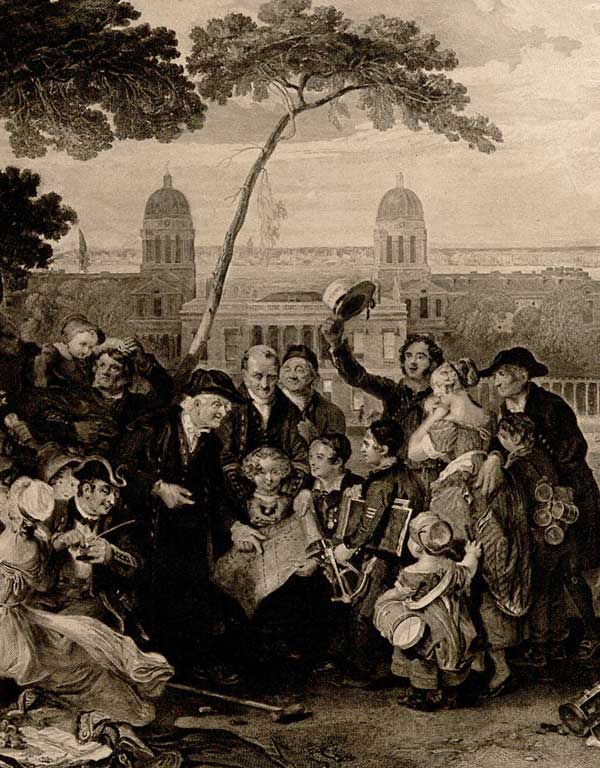 For 2-3 years, a long time ago, I earned my living doing historical research. It wasn’t family history, but I did explore the lives of a number of people from the 19th century, including Joe Brown, the man on the left in the engraving above, hoisting a child onto his shoulders. Anyone who has begun to trace their family roots will know that a name as common as “Joe Brown” is not a very promising start!! This man served on board the Victory, Admiral Lord Nelson’s ship at the Battle of Trafalgar, receiving prize money and a medal for his service. He made it through nearly 15 years in the Navy, including that most famous of battles, without injury to himself, and eventually received a pension from the Royal Naval Hospital in Greenwich, which you can see in the background of the picture.

From the experience of trying to unravel the lives of Joe Brown and a number of architects and engineers, I have a real feeling of interest and sympathy for those who are trying to trace their relatives from a distance. Now with the internet it is in some ways so much easier than when I had to go to the National Archives at Kew to try to make sense of Naval records – but even now, I know it is not easy, struggling with smudged handwriting and unfamiliar place names. I’m not a professional historian but I have relevant experience, and some of the most rewarding work I have done has been taking people to visit churches and exploring graveyards with them, visiting Air Force bases that have almost disappeared and finding the wartime memorials, or exploring addresses where family members were known to have lived.

If I can help you maximise your time in London or the UK as a tour guide or driver-guide, do get in touch.

The picture is a detail of an engraving by John Burnet of his own painting “Pensioners of the Royal Naval Hospital, Greenwich, celebrating the anniversary of Nelson’s victory at Trafalgar”. The engraving is in the Wellcome Trust Collection, and is reproduced here under the Creative Commons Attribution 4.0 International Licence. The original painting by Burnet is part of the Wellington Collection.